Sometimes I like to make quilts.  Baby quilts are the best because they aren’t very much commitment in terms of the actual quilting the whole thing together part.  I don’t have a longarm sewing machine so jamming everything through my little Janome is not overly fun.  I’ve done some quilt as you go, but it takes more preparation than I find I have time for these days.  A small quilt is easier to manage so the majority of quilts I make now are baby/toddler size. (although my table quilts are a little bigger than that)

When my best friend Angela had her first baby, of course I made her a quilt.  This was way back when we were still living in Washington state.  Okay, it wasn’t so long ago, but 2008 seems like ages when I think about all that has changed in our lives since then.

Anyway, she was having a girl and is obsessed with cats so of course I had to have lots of pink and include some cats on there.  I saw somewhere a quilt where these cat shadow appliques were walking up some steps under the moonlight and I liked the idea so I mixed it up a bit for a baby theme.  I turned the steps into alphabet blocks and when I realized the size and arrangement of the blocks would only allow for 25 letters, I used the first letter of the baby’s name in place of the moon so I would have the whole alphabet on the quilt.  I really love how this one turned out.  This was back when I had more time on my hands and fewer interruptions… clearly, hehe.

Angela studied abroad in Paris and she loves anything french inspired.  When she found these Paris cats (a Benartex design) we both fell in love with them and I used the fabric for the back of the quilt and some of the blocks on the front.

In 2012 Angela was expecting her third baby and her husband wanted to be surprised when she delivered so he didn’t find out the sex.  She decided the best way to handle the surprise was to send the sonogram to Spoonflower and then send the fabric to me to make a quilt with it.  Ah, the things pregnancy does to our brains, hehe.  I wasn’t sure how I was going to use an “it’s a boy” sonogram in a baby quilt, but I think it turned out great.

He is their only boy so we had to go all out and use her husband’s favorite British football team logos all over the back of it too.

Of course, I also used some french script fabric and blue British kitties in the mix to satisfy Angela’s tastes.  The patterns I used for the quilt all came from the free patterns offered on the Quilter’s Cache.  Rings in Motion for the center with the sonogram, Crossroads 2 for the corner squares, and Mock Logs for the other squares.  I like taking different patterns and mixing them up.  Planning a quilt is probably my favorite part of the process.
All this is to say that somehow when Angela had her second daughter I never made her a quilt!  I don’t remember exactly why, and I know I’ve made her other things, but I never got around to making her a baby quilt.  Maybe it was because I was pregnant with Bean at the time?  I have no idea, but she was turning three in February and it was high time to remedy the no-quilt situation.

This was a fun quilt to make because she is old enough to have some of her own interests.  As most little girls, she is obsessed with princesses and since her older sister has already claimed ALL THE PINK, she says blue is her favorite color.  So I used lots of princess fabric and made some bias binding with my Quickie Bias Tape method using some sparkly blue fabric to help the blues stand out a bit more.

I used the Broken Herringbone tutorial found here for the front blocks.  I had plans for how I would arrange the blocks, but then once I had them all sewn I was second guessing myself.  My original plan was to arrange them in a swirl shape (similar to how I arranged the baby boy quilt) like the top left above.  But then I liked the way the blue strips were flowing in the top right arrangement.  I quickly took pictures of two other arrangements I liked and posted this pic to Instagram to see what everyone else thought.  I got a lot of feedback in favor of the bottom left and a few with the top right.

In the end I decided to go with the top right, but I replaced the pink triangle shapes at the point of the blue strips so it would look a little cleaner.  I knew I would be quilting using a swirly shape that would start in the center and make its way out, so I thought the swirling legs of this arrangement would be the best complement while still featuring some of the blues. 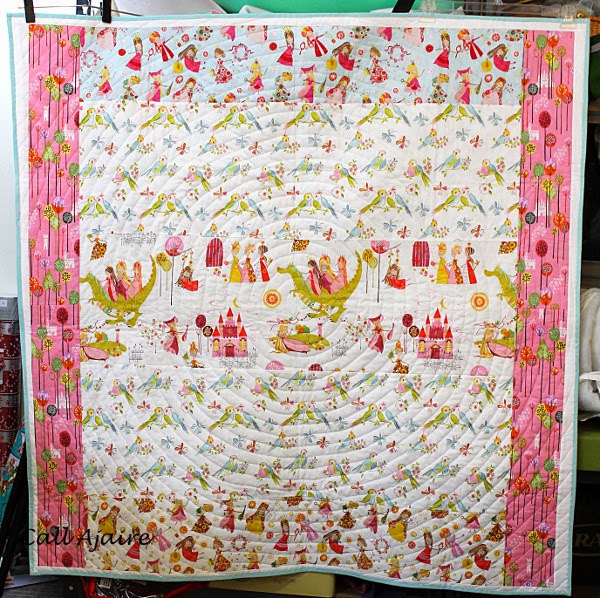 I took this picture and some of the front side before washing the quilt.  Does anyone else take before pictures to prove that you did indeed create something nice just in case the washing machine or dryer eats it the first time?  I am always SO nervous even though I’ve never had an issue.  The rest of the pictures above are all post laundry so they have the extra wrinkles a quilt should have and all the starch/Elmer’s glue has been washed out.
The back came out really nice too.  I was so pleased with how the quilting worked out.  It was really fast once I got the swirl started and speed is key these days.  Angela sent me the bird fabric used on the back since that is what was used for her bedroom.  I thought the colors went well with the princess fabric and I hope she likes it. 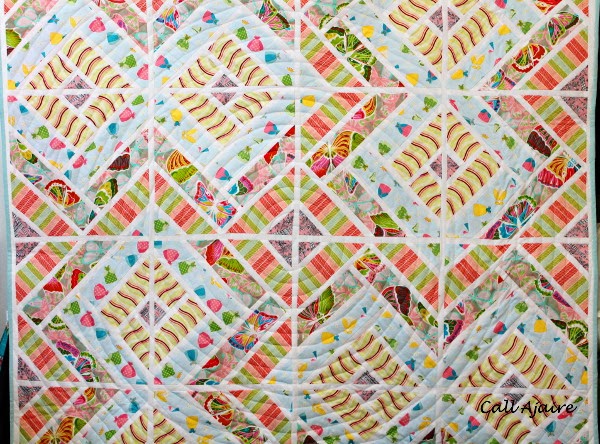 And of course I threw a little french fabric in there for Angela.  It’s hard to tell in these pictures, but the pink fabric is an Eiffel Tower print.  I used it for the center triangles and a few of the smaller ones on the front.  My sister used the same fabric here for a key fob card holder thing and I didn’t even make the connection until she saw it on Instagram and said she thought it was the same!
Now for those of you with regular sewing machines that do some quilting, I have a question.  How do you manage the quilting part?  I find it so frustrating to maneuver those big quilts, but maybe you have a solution I haven’t thought of.  I’d love to hear any tips!

What she lacks in skills, she more than makes up f

Best nine pics of the year 💕💕

Some great reads in 2022! This year I listened to

It looks cold, but was actually quite warm on my w

This girl doesn’t hesitate to jump in (literally